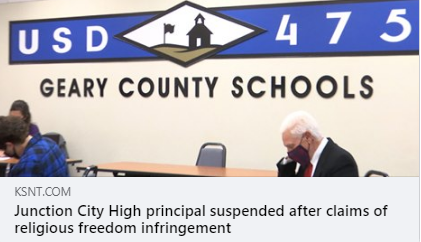 (KANSAS CITY, November 3, 2020) — The Kansas Chapter of the Council on American-Islamic Relations (CAIR-Kansas) today supported the suspension of Junction City High School Principal Melissa Sharp following an investigation sparked by an allegation that a hall monitor at the school demanded that a female student remove her hijab (Islamic head scarf) during school hours.

The Geary USD 475 Board of Education unanimously voted to suspend Principal Sharp for the remainder of the school year and begin the search for an acting principal.

“We support the decision to suspend Principal Sharp. Islamophobia cannot be tolerated in our schools, and we hope that Junction City High School and its school district will ensure that policies are properly implemented to prevent such incidents from happening in the future,” said CAIR-Kansas Board Chair Moussa Elbayoumy.  “All district personnel, especially school administrators, should be offered diversity training on the right to religious accommodations for students and staff and the proper way to enforce the district’s policies.”

He noted that CAIR-Kansas previously welcomed a probe of the incident.

Elbayoumy also referred to the fact that studies by several CAIR chapter reported that more than half of American Muslim students experience some form of bullying based on their religious identity. This is twice the national average for students who report being bullied at school.