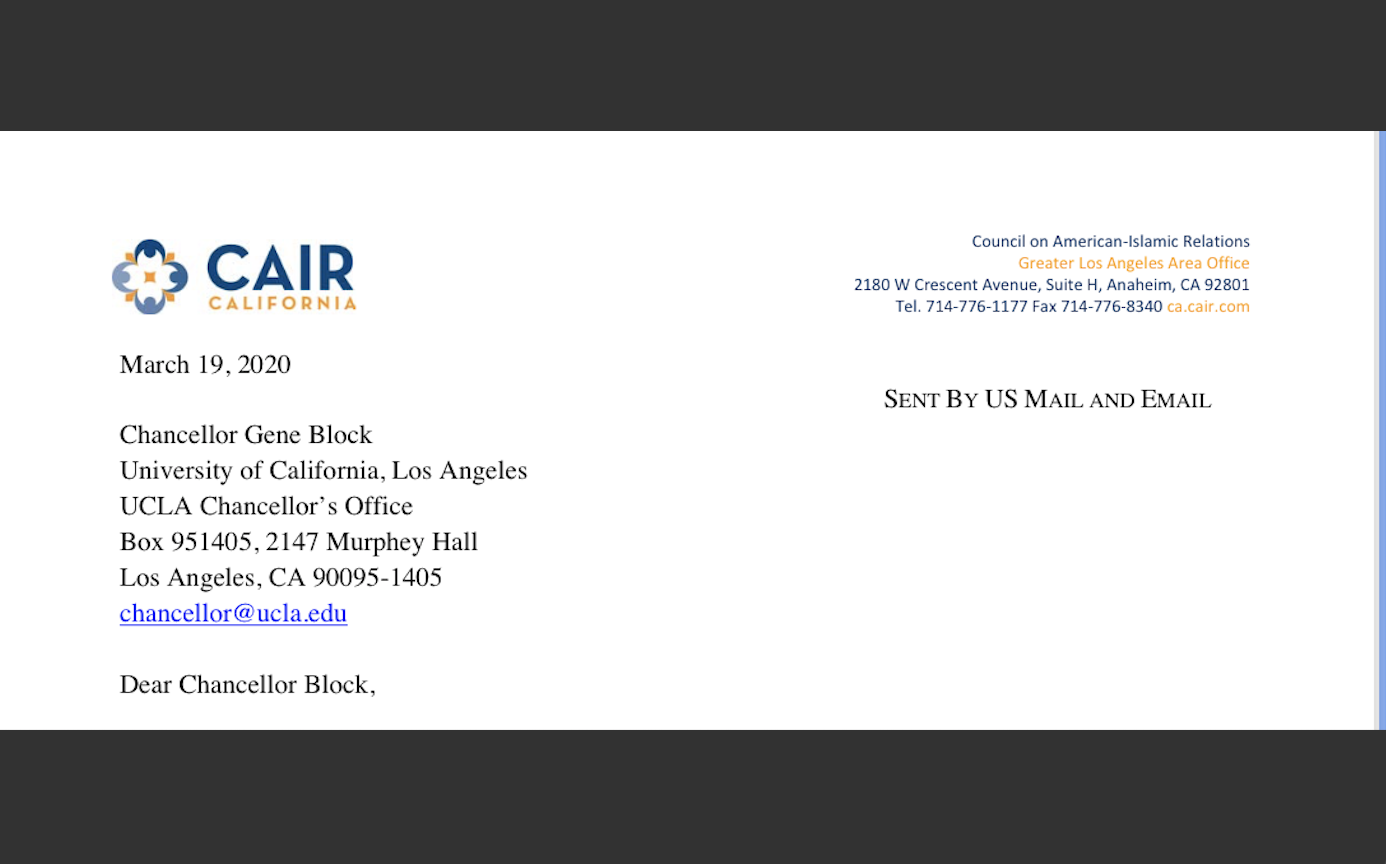 (LOS ANGELES, CA – 3/20/2020) – The Greater Los Angeles Area office of the Council on American-Islamic Relations (CAIR-LA) today joined a coalition of 19 interfaith and civil rights in calling on UCLA to protect free speech and academic freedom in response to the Department of Education’s Office for Civil Rights’ (OCR) decision to open investigations into two complaints made against the university.

The first complaint the OCR is investigating focused on UCLA’s handling of student concerns over a guest lecture in May 2019 on “Islamophobia and the attacks against Palestine organizing and scholarship” by Professor Rabab Abdulhadi in Professor Kyeyoung Park’s “Constructing Race” course, which is offered through the Anthropology, African American Studies and Asian American Studies departments.

UCLA’s internal investigation of the complaint, which included reviewing a recording of the lecture and interviews with students enrolled in the class, concluded that “the comments made during the lecture were not the type of severe, pervasive and persistent unwelcome conduct that constitutes harassment or discrimination.”

The second complaint being investigated by the OCR was filed in November of 2018 by the Zachor Legal Institute regarding the 2018 National Students for Justice in Palestine Conference, which was hosted by UCLA’s Students for Justice in Palestine at the university. This complaint came after a months-long pressure campaign demanding that UCLA infringe on students’ free speech rights by cancelling the conference.

In a letter to UCLA Chancellor Gene D. Block, the coalition wrote in part:

The letter explained that anti-Palestinian individuals and organizations have attempted to silence activism in support of Palestine through false claims that such pro-Palestinian activism is discriminatory and harassing. These individuals and organizations use negative publicity and intimidation as tools against university administrators and student and faculty activists as a means to stifle free speech and the free interchange of ideas when it comes to supporting Palestine.

The coalition called on the school’s administration to unequivocally reaffirm UCLA’s commitment to freedom of speech for students, staff and faculty when advocating for Palestinian human rights.

The letter to Chancellor Block concluded:

“We write today to urge you to issue a public statement making it clear that UCLA will defend against the OCR investigations and by extension defend the voices of all students, so that free speech and academic freedom can continue to flourish at UCLA.”

Students and community members to report any bias incidents to police and to CAIR-LA’s Civil Rights Department at 714-776-1177 or by filing a report at:  https://bit.ly/2L9Ezsw.