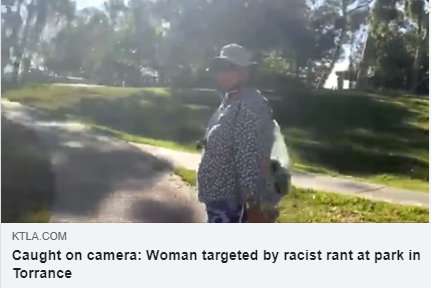 In a video provided to KTLA/5, the target of the rant – a young woman – was accosted by an older woman who accused the younger woman of blocking a set of stairs. The older woman began yelling, quickly turning her expletive rant into a racial attack.

“Go back to whatever (expletive) Asian country you belong in,” the older woman is seen shouting. “This is not your place. This is not your home. We do not want you here.”

The older woman noticed her rant was being recorded and threatened the target of her rant.

“You put that on Facebook. I hope you do, because every (expletive) person will beat the crap out of you from here on out,” the older woman yelled.

WATCH: Woman targeted by racist rant at park in Torrance

“No one should be accosted and threatened while peacefully using public facilities. We are grateful the young woman was not physically attacked. It has been a long-standing tactic of bigots to blame ‘the other’ – in this case, casting a spotlight of hatred on Asian-Americans.

“As hatred of marginalized minorities has increased over the past four years, we have warned against the danger of how normalizing hate speech can lead to hate threats and hate attacks. We stand with our sisters and brothers of Asian heritage and condemn the bigotry and hatred.”

Torrance police are investigating the incident. Ayloush called for the older woman, once identified, to be banned from using any park in the city again.

“The threat she issued made it obvious that this woman does not want to be a peaceful member of her community. How many others has she bullied and threatened? We call for her to be banned from public parks in Torrance.”