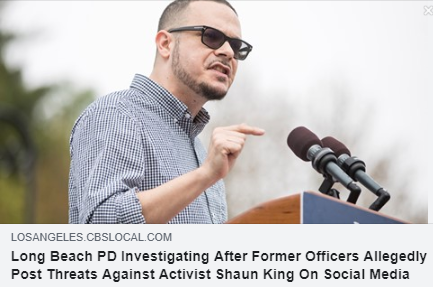 King, who was the keynote speaker at the CAIR-LA Annual Banquet in 2018, outlined what he says is evidence of California law enforcement officials “openly plotting to kill me and organizing each other to execute it” in an article on Medium.com.

According to KTLA/5, King shared screenshots from an unnamed private Facebook group of current and former officers of various California agencies posting messages such as, “Toss this guy from a helicopter,” “Need a sniper,” “Shaun King needs to be put down,” “I recommend retro active birth control, or post birth abortion, whatever you wanna call it,” and other threats that seemed to be aimed at King.

According to King, the threats began when a retired Long Beach Police officer allegedly wrote, “The man who put this tweet out today is a FOUNDING MEMBER OF BLM, he also introduced Bernie Sanders at his attempted presidential run. I think (California) needs to start putting a team together or retired military, police and NRA MEMBERS! We have no protection. These criminals that the Democrats created need to be stopped.”

In a statement Thursday afternoon, the Long Beach Police Department confirmed three former officers from its force were involved, but no one it currently employs as a police officer. The department said it has requested and will receive assistance from the FBI.

The L.A. Police Department said it had no comment on the allegations.

“Over the past few months, we have witnessed incidents of police brutality across the nation against Black women and men. These incidents, many of which have been deadly, begin with a twisted, entitled mindset. While disappointing, these threats against Mr. King are just another piece of evidence exposing the mindset of rogue law enforcement officers who feel entitled to orchestrate and carry out their own brand of sick justice.

“We welcome the investigation by both the LBPD and the FBI. We call for a full, complete and open investigation into this matter, as well as to confirm none of these threats were made by current law enforcement officers. These threats by former members of law enforcement agencies are reprehensible and they must be held accountable for their words before these people or others decide to turn them into actions.”