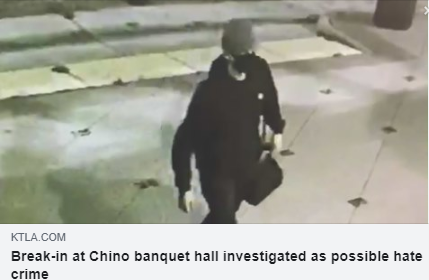 According KTLA/5, the burglary took place at about 9:45 p.m. on May 24 at The Grand Conquista, 13788 Roswell Ave., according to police and owner Ismaela Reyes.

Security cameras captured images of a masked man breaking into the business by removing a glass door panel. More than $30,000 worth of equipment ranging from projectors and TVs to DJ equipment were stolen.

According to KNBC/4, racial slurs about white supremacy were also spray-painted on the walls.

Police are investigating the incident as a possible hate crime.

“We condemn this display of racism and bigotry, especially during a pandemic. We urge law enforcement authorities to bring the perpetrator to justice and commend law enforcement for investigating this as a possible hate crime. Californians of all backgrounds must stand together in the face of growing hatred and division in our state and nation.”

Anyone with information is urged to call the Chino Police Department at 909-334-3000.