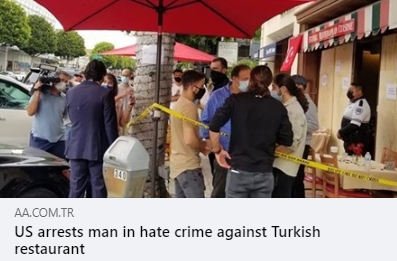 (LOS ANGELES, CA – 11/12/2020) – The Greater Los Angeles Area office of the Council on American-Islamic Relations (CAIR-LA) today welcomed the arrest of one of the primary suspects responsible for a hate crime at a Turkish restaurant in Beverly Hills.

According to the Beverly Hills Police Department, William Stepanyan of Glendale was arrested and charged with robbery, burglary, vandalism and a hate crime because of an attack at Café Istanbul on Nov. 4.

employees inside the restaurant and later in the alley outside of the restaurant. The victims stated that the suspects made derogatory comments during the incident.

The Beverly Hills Police Department and the FBI began an in-depth investigation, which led to extensive follow-up and review of evidence collected at the scene.

The restaurant appears to have been targeted because of the owners’ Turkish national origin.

According to a statement given to the CAIR-LA Civil Rights Department, one of the owners said the alleged attackers were speaking Armenian, swearing at the nation of Turkey and Azerbaijan and threatening the lives of the people in the restaurant.

“We are grateful that one of the alleged main instigators has been taken into custody – and appropriately charged with a hate crime. We are hopeful this person’s accomplices will soon be arrested and charged so the local Turkish-American community, which was terrorized and shaken by this hateful assault, can feel safe again.

“No individual or their business should ever be targeted in a manner such as this. We urge fellow Californians not to allow international conflicts to undermine harmony and the safety of any community here in our country.”