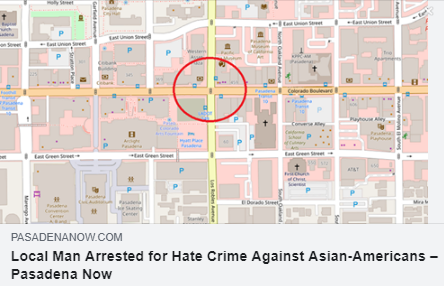 According to Pasadena Now, Maurice Cornelius Spears, 36, was arrested after on suspicion of battery and a hate crime after allegedly throwing two energy drink cans at a group of Asian American victims near the intersection of Colorado Boulevard and Los Robles Avenue at about 8:30 p.m.

Neither container struck any of the victims, but the liquid was sprayed on them. Spears began yelling racial slurs at the group, prompting them to call the police.

According to the Pasadena Police Department, this was possibly the first hate crime which has occurred during the pandemic, although there have been a number of other incidents without specific allegations rising to the level that could lead to an arrest.

“We are grateful no one was injured in this incident and appreciate the quick and professional response of the Riverside Police Department. It has been a long-standing tactic of bigots to blame ‘the other’ – in this case, casting a spotlight of hatred on Asian-Americans.

“COVID-19 is a disease caused by a virus. It doesn’t have a race, religion, nationality or political ideology.

“As hated of marginalized minorities has increased over the past four years, we have warned against the danger of how normalizing hate speech can lead to hate threats and hate attacks. We stand with our sisters and brothers of Asian heritage and condemn the bigotry and hatred that has stemmed from this pandemic.”


Ayloush urged community members to report any bias incidents to police and to CAIR-LA’s Civil Rights Department at 714-776-1177 or by filing a report at:  https://bit.ly/2L9Ezsw.