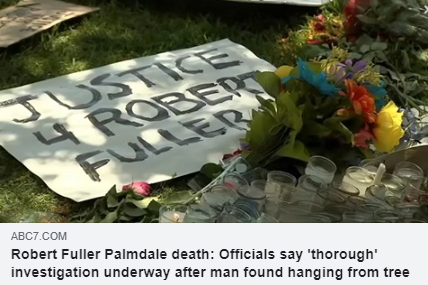 (LOS ANGELES, CA – 6/15/2020) – The Greater Los Angeles Area office of the Council on American-Islamic Relations (CAIR-LA) today welcomed the decision by the state attorney general’s office and the FBI Civil Rights division to join the investigation into the death of Robert Fuller, a man found hanging from a tree in Palmdale on June 10.

CAIR-LA also welcomed the decision of the L.A. County Coroner’s office to withdraw its initial preliminary assessment of death by suicide as the cause of the death of Fuller, 24.

Additionally, CAIR-LA joins the multiple calls for an independent investigation into Fuller’s death and the May 31 death of Malcolm Harsch, who was found hanging from a tree in Victorville, less than 50 miles away from Palmdale. Like Fuller, Harsch’s death was ruled as a suicide.

According to KABC/7, the state attorney general’s office and FBI will monitor the investigation conducted by the L.A. County Sheriff’s Department, which initially ruled the cause of Fuller’s death as a suicide. The state and federal agency monitoring came after mounting calls for an independent investigation.

“We join with the family and friends of Robert Fuller, the Black community in Palmdale, elected officials, allies and persons of conscience in calling for a transparent and thorough investigation into the cause of Mr. Fuller’s death and the death of Mr. Harsch.

“It should not have taken a national call for a more thorough investigation into the death of Mr. Fuller to have happened. In the current climate of protests against racial injustice and police brutality, two Black men found hanging from trees in the same region should have been taken more seriously.”