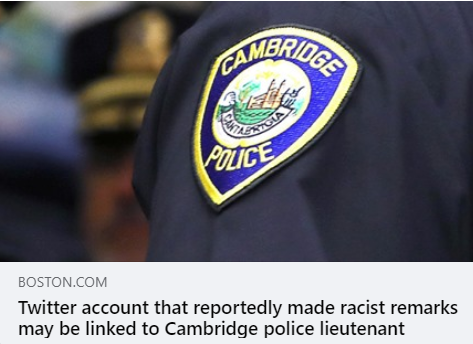 (BOSTON, MA, 09/16/2020) — The Massachusetts chapter of the Council on American-Islamic Relations (CAIR), the nation’s largest Muslim civil rights and advocacy organization, today condemned a series of racist and derogatory tweets allegedly made by a Cambridge Police Department (CPD) lieutenant. CAIR-MA also offered to conduct anti-racism training for that police department.

In a statement, CAIR-MA said:

“CAIR-Massachusetts joins other people of conscience in urging a full and transparent investigation into the nature and origin of these racist messages, just as the Cambridge Police Department has committed to conducting. Assuming that the Twitter account in question does indeed belong to the officer in question, as the CPD apparently suspects, we’re concerned about the officer’s crude and stereotyped reference to Islam, which may well carry over into his or her interactions with Muslim residents of Cambridge.

“In addition, we condemn his or her racist language and attempt to create a false equivalency between the Black Lives Matter movement and white supremacists. Finally, we would like to use this as an opportunity to offer to facilitate a departmental training on Islam and interactions with the Muslim community.”