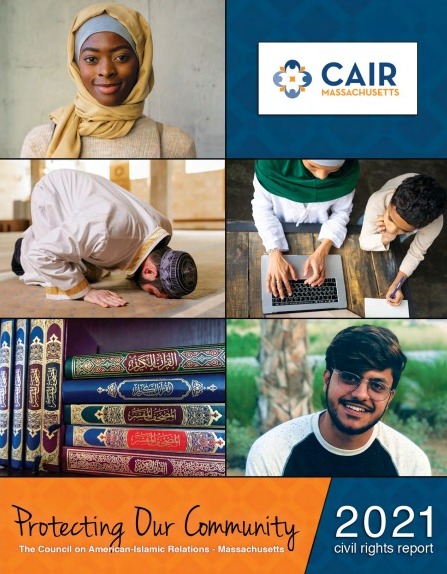 In addition to cases from 2021, the report also documents over 1,000 calls for assistance from members of the Muslim community to CAIR-MA since 2016, when its legal department was established.

CAIR-MA received 163 requests for legal assistance in 2021, down from an average of 240 in prior years.  However, when schools returned to in-person classes, calls about aggressive, sometimes violent, bullying of Muslims students spiked.  Calls about hate crimes continue to decrease each year, from 28 in 2017 to nine in 2021.

“Our report demonstrates that while there have been some positive developments, Islamophobia continues to present a threat to Massachusetts Muslims. While we received fewer requests for help this year, the nature of the complaints was still alarming. They are indicative of the fact that anti-Muslim bigotry is not limited to acts of hate targeting Muslims at an individual level, but rather is present and active in our state’s institutions.  We can only hope that this report and others like it lead to action on the part of Massachusetts officials to ensure that the civil rights of Muslims in our state are upheld.”

“In 2021, our chapter’s legal department received over a thousand complaints since its establishment in 2016. This is bittersweet because although we are eager to be a champion for Massachusetts Muslims when they need us, we are driven by the fact that too many people need help to secure the basic human right of freedom of religion. Massachusetts has good laws on the books.  Our state officials must be committed to enforcing them.”

Last month, the national CAIR office issued a report, “Still Suspect: The Impact of Structural Islamophobia,” that shows a 9% increase in complaints since 2020 and a 28% increase in hate and bias incidents as COVID-19 slowly subsided.