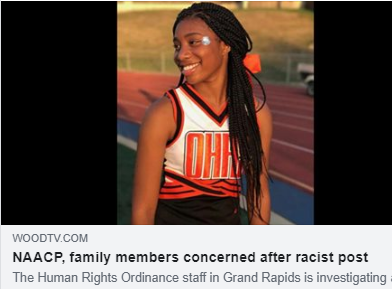 (FARMINGTON HILLS, MI, 05/27/2020) – The Michigan chapter of Council on American Islamic Relations (CAIR-MI), a local chapter of the nation’s leading Muslim civil rights and advocacy group, today condemned the posting of a racist advertisement taken out on Craigslist against an African-American family in Grand Rapids, Mich.

CAIR-MI also called on local prosecutors investigate the incident as a possible hate crime and urged Craigslist to take action immediate to ensure that its platform is free of racist and violent posts.

On May 26, 2020, an individual took out a racist and expletive-ridden Craigslist add accusing a local Grand Rapids family of gathering at their home and selling drugs. The poster further called for community members to arm themselves from the crime that they asserted come as a result of this family’s presence in the community.

The African-American family targeted by the false and defamatory advertisement had just suffered the tragic loss of their 17-year-old daughter when they had to endure this attack from a racist member of their own community.

“This post epitomizes the type of racial profiling and outright bigotry that has become more prevalent and blatant since the 2016 election. All citizens of Michigan should be concerned with the call for citizens to arm themselves against African-Americans who are doing nothing but going about their daily lives and mourning the loss of their young daughter. It is exactly this type of vigilantism that led to the recent death of Ahmaud Arbery in Georgia and it cannot be tolerated. We have a duty to ensure that no more innocent black and brown men and women will be targeted and hunted down because of the color of their skin.”

“CAIR-MI calls on local law enforcement to investigate this post as a hate crime in order to send a message to the citizens of Grand Rapids that they cannot target members of the community based on their race. It is clear from the post that the primary motive of the account holder was to defame and target this family based on their race.

“CAIR-MI further calls on Craigslist to take action against the person responsible for this reprehensible post and work to ensure that posts of this nature on not tolerated on their platform.”