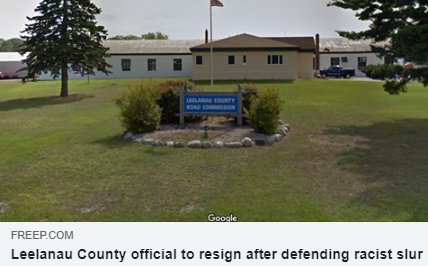 (CANTON, MI, 8/8/20) – The Michigan chapter of the Council on American-Islamic Relations today (CAIR-MI) today welcomed the resignation of a Leelanau County road commissioner who used the “N-word” in an angry outburst during a public meeting.

Leelanau County Road Commissioner Tom Eckerle recently made that racist outburst after being asked as to why he refused to wear a mask for safety precautions due to the COVID-19 pandemic.

Eckerle, who is a Republican, reportedly said, “Well, this whole thing is because of them n—–s in Detroit. . .I can say anything that I want. Black Lives Matter has everything to do with taking the country away from us.”

When later confronted about the usage of racial slurs, Eckerle doubled down by saying, “No, I don’t regret calling it a n—-r.”

CAIR- MI two days ago along with local officials and a Michigan racial justice coalition called for Eckerle to resign from his commissioner position.

“We welcome the resignation of Eckerle due to pressure placed upon him from Leelanau County officials and civil rights advocates,” said CAIR-MI Executive Director Dawud Walid. “We urge elected officials irrespective of political affiliation to denounce any future racist hate speech in our state, especially when it comes from government officials.”