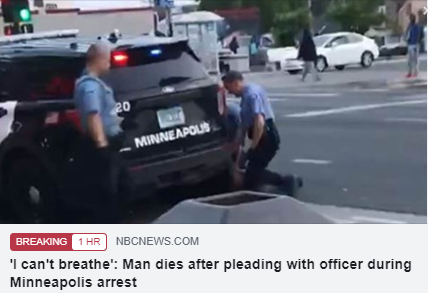 (MINNEAPOLIS, MN, 5/26/2020) – The Minnesota chapter of the Council on American-Islamic Relations (CAIR-Minnesota) today called for the immediate arrest of the two Police officers involved in choking and killing George Floyd.

CAIR-Minnesota cited a video showing a white Minneapolis police officer kneeling on an African-American man’s neck and ignoring the man’s clear statement that he could not breathe. The man later died. FBI officials say they are investigating the incident.

Minneapolis Mayor Jacob Frey said he believes that race played a part in the incident. He said: “For five minutes, we watched a white officer press his knee into a black man’s neck. Five minutes. When year hear someone calling for help, you’re supposed to help. This officer failed in the most basic, human sense.”

SEE: ‘I can’t breathe’: Man dies after pleading with officer during Minneapolis arrest

“We are shocked and saddened to the core after watching George Floyd die,” said Jaylani Hussein, executive director of CAIR-Minnesota. “It’s a dark day in Minneapolis to see an innocent man plead for his life and be choked to death by those who are supposed to protect and serve.”

Hussein added that there is enough video evidence that the officers involved in this case be immediately arrested pending appropriate charges.