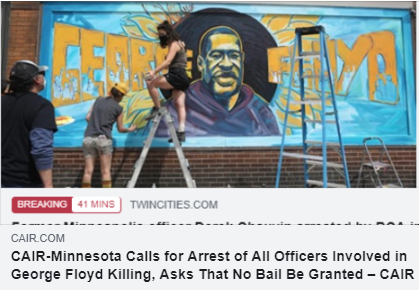 (MINNEAPOLIS, MN, 5/30/20) – – The Minnesota chapter of the Council on American-Islamic Relations (CAIR-Minnesota) today called on state officials to respond to unrest on the streets by taking immediate steps to secure justice for George Floyd, beginning with the arrest of all officers involved in his murder.

“We are all in pain as we watch our cities burn. However, our leaders still refuse to acknowledge that this unrest is occurring because of their failure to immediately arrest and charge all four officers involved in the murder of George Floyd.

“Where there is no justice, there will be no peace. We need the governor to empower the state attorney general to bring charges against the remaining three officers, who should be held without bail pending trial.

“Justice delayed is justice denied. White supremacists, anarchists and other bad actors are the only ones benefiting from the chaos resulting from delayed justice.”

Yesterday, CAIR-Minnesota called for the arrest of all Minneapolis police officers involved in the killing of George Floyd.

That demand came following the arrest of Derek Chauvin, the officer who was seen on video kneeling on Floyd’s neck.

SEE: CAIR-Minnesota Calls for Arrest of All Officers Involved in George Floyd Killing, Asks That No Bail Be Granted