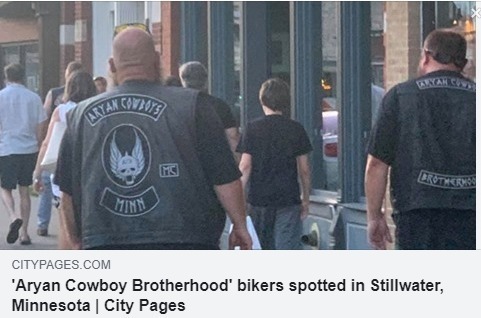 (MINNEAPOLIS, MN, 6/29/20) – The Minnesota chapter of the Council on American-Islamic Relations (CAIR-Minnesota) today called on public and law enforcement officials in Stillwater, Minn., to take concrete actions to ensure the safety of members of the Muslim and other minority communities after bikers allegedly harassed and intimidated a Muslim mother and her child.

Stillwater police are investigating the incident in which the Muslim mother and her four-year-old daughter were reportedly intimidated by a motorcycle gang wearing jackets that read “Aryan Cowboys.” The “very visible Muslim woman” was having dinner Saturday evening in downtown Stillwater when the bikers allegedly made it clear they did not want her there and “tried to intimidate her.” The Muslim mother and her daughter were escorted to her car by restaurant staff and a police officer.

Muslim Woman in Stillwater Said Bikers Made Her Uncomfortable

“We thank the restaurant staff and the police officer who sought to protect the Muslim mother and her child, but public officials must take concrete steps to ensure that this type of harassment and intimidation targeting members of minority communities does not occur in the future,” said CAIR-MN Executive Director Jaylani Hussein.