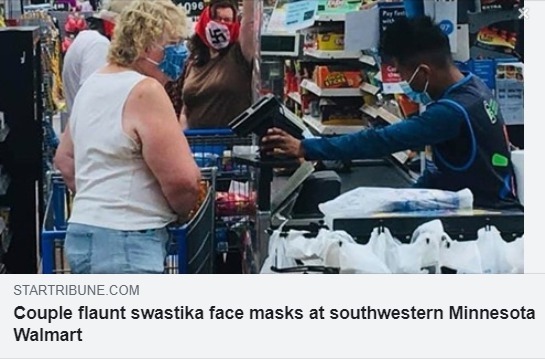 (MINNEAPOLIS, MN, 7/26/20) – The Minnesota chapter of the Council on American-Islamic Relations today (CAIR-Minnesota) tonight condemned an incident in Marshall, Minn., in which two Walmart shoppers wore Nazi swastikas on their face masks.

CAIR-MN denounced the couple’s offensive actions and called on Walmart and public officials to repudiate the hate represented by the customers’ actions.

On Saturday, police officers were called to the Marshall Walmart in response to a report that two shoppers were wearing masks depicting Nazi swastikas. Other customers confronted the couple, and one shopper posted a video of the interaction on Facebook. Law enforcement authorities served the swastika-wearing couple trespass notices and they departed without charges being brought against them.

“We denounce this hate symbol and all hate speech targeting the Jewish community and stand in solidarity with those impacted by the bigotry these individuals displayed,” said CAIR-MN Executive Director Jaylani Hussein. “All Americans must work to dismantle the systemic racism that continues to target minority communities.”

CAIR and the American Muslim community are standing in solidarity with all those challenging anti-Black racism, Islamophobia, anti-Semitism, and white supremacy.