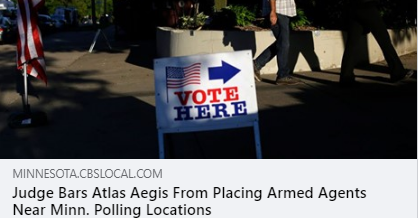 Order Issued Against Private Mercenary Company and Its Chairman

(MINNEAPOLIS, MN, 10/29/20) — Today, a federal district court judge ruled in favor of the Minnesota chapter of the Council on American-Islamic Relations (CAIR-MN) and the League of Women Voters of Minnesota, granting a preliminary injunction in a move that prohibits private mercenary contractor Atlas Aegis and its chairman Anthony Caudle from moving forward with its illegal voter intimidation plans in the state.  The plaintiffs filed their lawsuit last week to block the planned voter intimidation as unlawful under the Voting Rights Act.

Atlas Aegis, a Tennessee-based corporation with no ties to Minnesota, had planned to hire and deploy armed para-militia to polling sites in the state through an advertisement for armed security on Election Day in the Minneapolis/St. Paul metro area that appeared on job posting websites on October 6, 2020, as well as interviews with the company’s chairman Caudle in The Washington Post.

In all, the court’s order requires the defendants to do the following:

U.S. District Court Judge Nancy E. Brasel noted that “Voter organizations must show that it is likely that the Defendants will attempt to intimidate voters or that their actions will do so […] the voter organizations have shown both,” and that “The presence of armed ‘guards’ at the polls with no connection to state government is certainly likely to intimidate voters.”

“This ruling is a major victory for democracy and for the fundamental right to vote,” says Jaylani Hussein, executive director of the Council on American-Islamic Relations of Minnesota.  “We celebrate this ruling, and we will continue to remain vigilant in defending the promise of free and fair elections for all.”

“Today’s ruling affirms the right to unimpeded, unthreatened access to the vote for every eligible Minnesota voter,” said Michelle Witte, executive director of the League of Women Voters of Minnesota. “We’re grateful the Minnesota Attorney General’s Office quickly launched an investigation into this situation and came to an agreement, and we’re delighted we were able to carry it further. Armed mercenaries have no place in our election system, either by their presence at the polls or their threats to be there. We applaud the court’s decision to protect voters—particularly voters of color—as they exercise their constitutional right to vote.”

“Armed mercenaries have no place anywhere near our polling places and would be an affront to Democracy,” says Ben Clements, Board Chair and Senior Legal Advisor for Free Speech For People, which serves as co-lead counsel for the plaintiffs in this case.  “As the Court recognized, the defendants’ actions in recruiting armed vigilantes, threatening to send them to polling stations, and targeting Black Lives Matter and other groups whose political views they oppose violated the Voting Rights Act.  With the Court’s action enjoining this unlawful conduct, Minnesota voters can go to the polls to vote free from fear and intimidation.”

Last week, voting rights advocates celebrated an agreement between the Minnesota Attorney General and Atlas Aegis that the company would not provide any “security” services in Minnesota around the November 3 election, would not intimidate or threaten to intimidate any voter, and would communicate through its channels that it was wrong to suggest it was recruiting security for “protection of polls” in Minnesota. Today’s ruling is important because the court acknowledged that the agreement did not fully address the claims brought by CAIR-MN and the LWV-MN against all of the defendants.

Minnesota is currently in the midst of its early voting period, which continues until November 2.