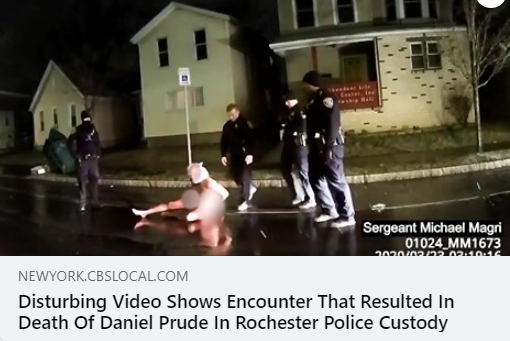 (NEW YORK, NY, 9/4/20) – The New York chapter of the Council on American-Islamic Relations (CAIR-NY) today issued a statement on the police killing of Daniel Prude.

On September 2, the Rochester Police Department released body camera footage of a March incident where police killed Daniel Prude, a Black man, during the course of an arrest. Prude died of asphyxiation after officers placed a cover over Mr. Prude’s head and pinned him to the ground while restraining.

In response, the New York chapter of the Council on American-Islamic Relations (CAIR-NY) issued the following statement from Legal Director Ahmed Mohamed:

“Daniel Prude’s murder at the hands of Rochester Police Department officers is horrifying and disturbing. We send our condolences to his family and loved ones and community grieving his loss. Mr. Prude should still be alive and with us today.

“It is clear from the footage that Mr. Prude needed mental health assistance but instead was met with deadly force.

“The fact that the officers involved were allowed to remain on the force and patrol the streets of Rochester is shocking and must be immediately investigated. Those responsible must be identified and disciplined. Murder suspects should have no business patrolling the streets under color of law. It is evident that the Rochester Police Department and Mayor Lovely Warren sought to shield these officers by withholding the body camera footage from the public for over five months.

“Mr. Prude needed mental health professional care. Instead, he was murdered and treated without dignity. Mr. Prude’s family and members of the Rochester community need answers and justice must be served without delay.  The authorities must stop hiding evidence from the public.  Sunlight is the best of disinfectants.

“We reiterate our long-standing position that police are not equipped to handle mental health crises.  We urge lawmakers to invest in communities and mental health professionals.”