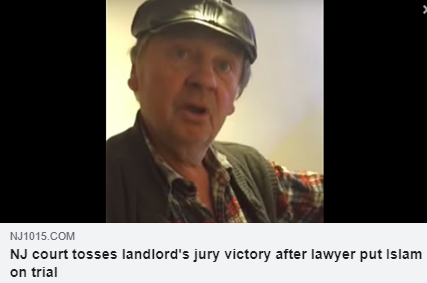 (SOUTH PLAINFIELD, NJ, 5/14/20) – The New Jersey chapter of the Council on American-Islamic Relations (CAIR-NJ) today applauded the tossing of a court case that put Islam on trial.

The state convinced an appellate court to toss a jury decision that sided with a city landlord accused of discriminating against a Muslim woman who tried to rent an apartment.

A three-judge panel on Wednesday ordered a new trial in the discrimination case against William Greda, finding that the judge and defense attorney unfairly put the religion of Islam on trial.


Court rules prohibit using religious beliefs or opinions to be used as evidence against the credibility of a witness. The appellate decision on Wednesday said that Greda’s attorney engaged in a “clear and direct attack” on the Muslim woman’s credibility by suggesting that the Islamic faith allows Muslims to lie.

“We welcome the appellate court’s decision to toss out a case that unjustly put the religion of Islam on trial. The cross-examination by the defense attorney is a double insult to a woman who faced clear discrimination based on her religion when shopping for an apartment.

“The type of questioning endured by Ms. Farghaly is insulting, assuming Muslims to be lawless suspects hoping to achieve perverse goals. It provides zero substantive information or value to a case that is otherwise a clear assault against Muslim’s and their faith.

“Courts should uphold the facts of the case and not entertain bigoted and baseless beliefs.”