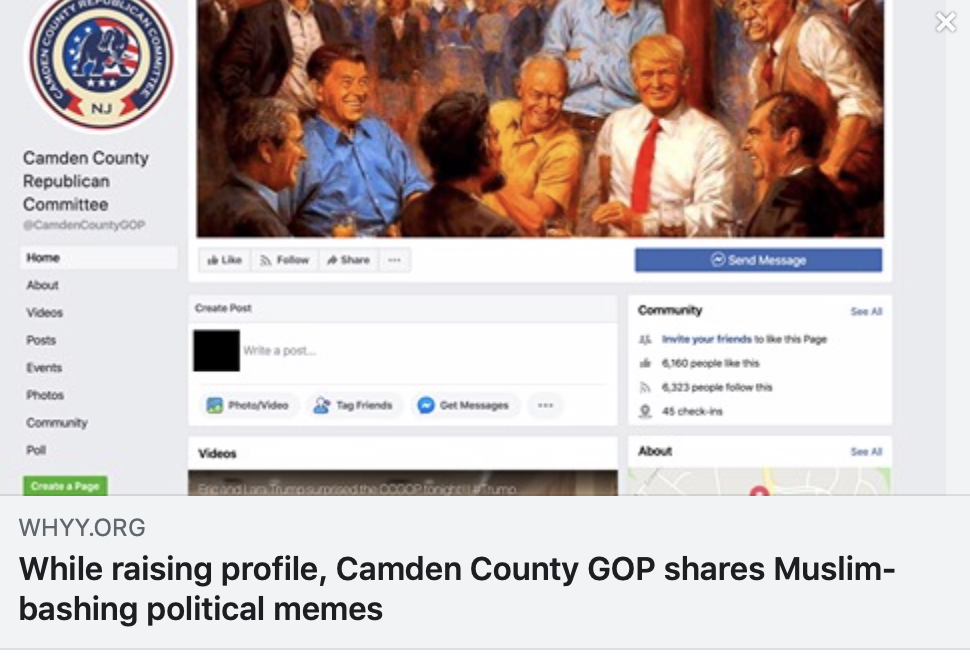 On January 6, the Camden Country Republican Committee Facebook page shared a meme of Minnesota Rep. Ilhan Omar, who is Muslim, laughing above an image of the smoldering World Trade Center buildings, adding the comment: “The enemy within.” The next day came a meme depicting an imaginary back-and-forth in which Omar says, “I hate Trump,” and Trump responds, “Most terrorists do.”

Another post shows a still of actor Jon Hamm from the TV show “Mad Men” with text reading, “When I heard Trump took out the leader of ISIS I thought he got Obama.” At least two other posts on the Camden GOP page have been flagged by Facebook’s independent fact-checkers as “false information.” They relate to a quote wrongly attributed to Mark Twain and the value of pens allegedly used by Trump and House Speaker Nancy Pelosi.

“The Camden Country Republican Committee Facebook page is an unapologetic hotbed of Islamophobic and anti-Muslim propaganda. You would expect to see such racist and bigoted rhetoric in the dark recesses of the Internet, but not on the official Facebook page of a local political party.

“These posts should not be tolerated by any government official and should be wholeheartedly condemned by the New Jersey Republican Party.

“This serves as a painful reminder of the Islamophobia that grips our nation today. At a time when hate crimes are on the rise, such vile speech is irresponsible and puts New Jersey Muslims at risk.”