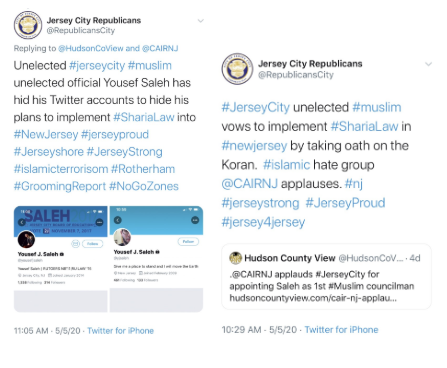 On May 5, the Jersey City Republicans tweeted against newly-appointed Jersey City Councilman Yousef Saleh, claiming Saleh is hiding “his plans to implement #ShariaLaw into #NewJersey. . .#islamicterrorisom.”

[NOTE: The false claim that American Muslims are seeking to implement “sharia law” (Islamic principles) in the United States is a common conspiracy theory promoted by Islamophobes.]

Another tweet stated in part, “unelected #muslim vows to implement #ShariaLaw in #newjersey by taking oath on the Koran.”

“We call on New Jersey GOP leaders to wholeheartedly condemned these shameless and bigoted tweets that spread hatred and fear of Muslims. At a time when hate crimes are on the rise, such vile speech is irresponsible and puts New Jersey Muslims at risk.

“It is disheartening to see anti-Muslim rhetoric coming from local political parties here in New Jersey, but not entirely surprising as it serves as a painful reminder of the Islamophobia that is increasing in our nation today.”