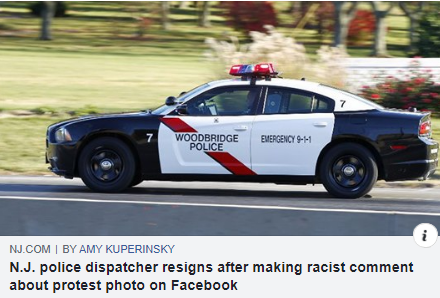 
An employee of the Woodbridge Township Police Department has resigned after he was suspended for posting a racist comment on social media.

Marc Repace, who worked as a dispatcher, submitted his resignation Monday after the Facebook exchange came to light.

In the messages, Repace comments on a photo taken Friday of an African-American child at a Boston protest of police brutality and racial injustice.

“We welcome the quick resignation of the police dispatcher and applaud the Woodbridge Police Department’s statement on the issue.

“CAIR-New Jersey offers free services to help facilitate educational programming for Woodbridge Police Department officers on the issues of racial, cultural and religious sensitivities in order to help dismantle the apparent bigotry and hatred within their department. With the rise of police brutality, it is imperative local police officers engage in meaningful discussions and educational seminars on these issues, otherwise, we fear continued police violence against Black Americans, and minorities in general.”