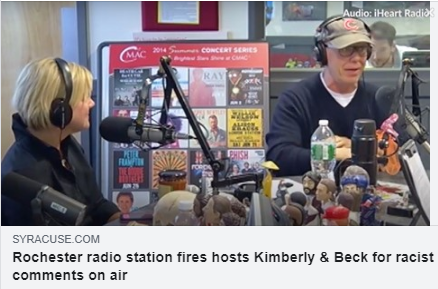 (NEW YORK, N.Y. 6/4/2020) – The New York chapter of the Council on American-Islamic Relations (CAIR-NY), a chapter of the nation’s largest Muslim civil rights and advocacy organization, today welcomed the firing of Rochester-based radio hosts Kimberly Ray and Barry Beck for their deeply racist, anti-Black remarks made Tuesday on their daily show, “Kimberly and Beck.” The two were fired Wednesday morning by the network owners iHeartMedia.

The New York station Radio 95.1 (WAIO-FM) owners terminated the hosts after learning of the comments made by the pair while on air. Kimberly Ray, referencing an aggressive incident in which a local couple had been attacked by a group of looters during protests on Sunday, inquired if those looting had been acting “N-word-ish” and “N-word-ly.” Barry Beck, in response, made reference to these same people “looking” and “acting” like “thugs.” These comments sparked massive outrage on Twitter, promptly leading to the firing of the hosts.

“CAIR-NY applauds the firing of Rochester radio show hosts Kimberly Ray and Barry Beck for their racist and deeply disturbing remarks made live on air. As a society still in mourning over the murder of George Floyd and so many other Black Americans, comments like these cannot be tolerated. In this matter, iHeart Radio demonstrated a willingness to combat racism wherever it exists, and we commend them for doing so.”

CAIR-NY is committed to exposing racist tropes and remarks and holding offenders accountable.