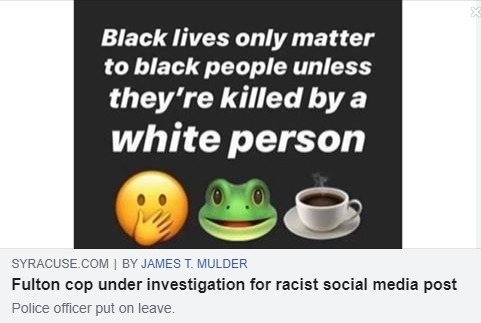 The officer has been placed on leave after it was discovered he posted a message stating: “Black lives only matter to black people unless they’re killed by a white person.” The post also included a meme of a frog often associated with white supremacy and comes at a time of unrest following the murder of the killing of George Floyd, a Black man in Minneapolis, by a white police officer.

“With the raging examples of what happens when racism goes unchecked in law enforcement, every police agency must enact zero tolerance policies to combat racist actions by those charged to protect our communities,” stated CAIR-NY Executive Director Afaf Nasher.  “While we appreciate the police department’s decision to put this officer on leave and to commence an investigation, we hope that these actions are only the beginning. Any allegiance to white supremacy, and by extension, all forms of racism, by an officer must be dealt with swiftly and severely if we are ever to see a shift in systemic discrimination within police departments.”

CAIR-NY has condemned racism within the use of law enforcement in various contexts: