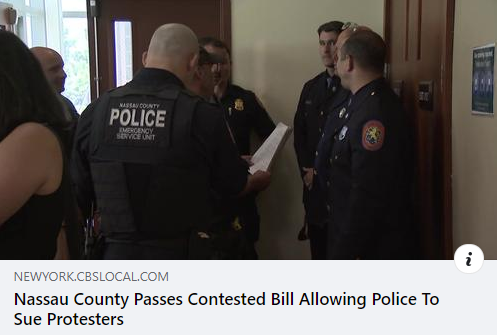 The proposed legislation protects police and first responders as a class based on profession and declares an “irrebuttable presumption” of discrimination if the civilian act occurs while the first responder is in uniform. Penalties can reach up to $50,0000. On August 2, 2021, the Nassau County legislature passed the bill, and it now waits on Executive Curran to either veto it or sign it into law.

“Local Law 187-21 is a dangerous threat to those engaged in constitutionally-protected free speech. It was obviously intended to chill the actions of protesters seeking police reform. By threatening civilians with steep civil penalties for discriminatorily ‘harassing’ a police officer, especially without any evidence of intent to discriminate, gives law enforcement a level of protection higher than the civilians they are charged with protecting. Even hate crimes require substantial proof of discriminatory intent.

“We call on Executive Curran to veto the legislation. Police officers already wield an immense amount of power over civilians. In recent Black Lives Matter protests, we have seen civilian protesters endure tear gas and even physical assaults for daring to be vocal against injustice.  Our elected officials should be among the first to amplify the people’s right to protest without further intimidation.”