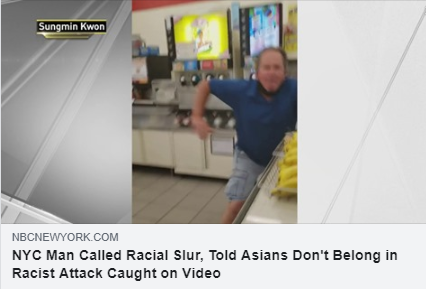 (NEW YORK, N.Y., 6/19/2020) – The New York chapter of the Council on American-Islamic Relations (CAIR-NY), a chapter of the nation’s largest Muslim civil rights and advocacy organization, today condemned a violent incident in a Bayside 7-Eleven store, during which a man was shoved to the ground, and confronted with extremely aggressive racial slurs. The victim, Sungmin Kwon, captured the altercation on video. The NYPD has launched a hate-crime investigation.

Upon entering the 7-Eleven, the offender began shouting anti-Asian racial slurs at Kwon. When Kwon confronted the man on his racism, the man approached him, trying to kick him, and yelling racial slurs. Eventually, as Kwon filmed the entire interaction, the man lurched at him, shoving him to the ground. Thankfully, Mr. Kwon sustained no injuries.

This altercation is part of a concerning swell in anti-Asian hate crimes in New York City and nationally, induced by the bigoted assertion that East-Asians, specifically Chinese people, are responsible for the spread of the Coronavirus.

“CAIR-NY is deeply saddened and concerned by this hate incident, as it is part of a disturbing spike in anti-Asian hate crimes in New York City. We wholly reject and condemn the targeting of and discrimination against the East-Asian community in New York and are relieved to learn that the NYPD is investigating this act as a hate crime. The rhetoric and aggression deployed by this aggressor is absolutely deplorable and CAIR-NY is committed to defending the integrity of all victims of such horrendous crimes.”

CAIR-NY is saddened by, yet firmly committed to defending the victims of hate crimes in New York:

To report a hate crime or bias-incident/discrimination to CAIR-NY, visit www.cair-ny.org/incident-report , or to the New York Attorney General’s office, call the AG’s hotline at 1-800-771-7755 or  email civil.rights@ag.ny.gov.