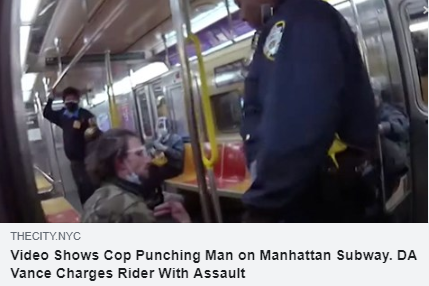 (NEW YORK, N.Y. 7/16/2020) – The New York chapter of the Council on American-Islamic Relations (CAIR-NY), a chapter of the nation’s largest Muslim civil rights and advocacy organization, today condemned the assault of a homeless man riding the subway by a NYPD officer. Having been punched twice in the face, the victim, not the officer, is being charged with assault by Manhattan District Attorney Cyrus Vance.

The victim, identified as Joseph T., recently left a homeless shelter due to concerns about waiting in crowded spaces for an unoccupied bed to open. Riding the train, Joseph’s handful of belongings spilled onto the neighboring seat. On the entirely empty subway car, the officers insisted Joseph move and get off the train, as he was “occupying more than one seat.” As the officer forcefully grabbed him, Joseph yanked back to release himself. The officer then immediately responded with multiple punches to the victim’s face and dragged him out of the train.

Originally charged with resisting arrest and obstructing government administration, the Manhattan District Attorney’s office has upgraded Joseph’s charges to felony assault. This comes as the victim was bleeding from the ear, was threatened with pepper spray, and was undergoing a severe panic attack during the arrest as a result of the physical harm inflicted upon him.

“With video evidence accessible to all, it is clear that these officers deployed brutal, excessive force to remove the victim from an almost entirely empty subway car. Not having been able to find space in a homeless shelter, this man was needlessly brutalized and traumatized for doing nothing but sitting quietly on a train. A badge does not authorize inhumane conduct. We demand that these officers be held accountable. We also demand that District Attorney Vance drop the charges against the victim, which only serve to further victimize Joseph and perpetuate the injustice inflicted upon him.”

SEE: CAIR-NY Condemns Use of Force by Buffalo Police Officers Against 75-Year-Old Man Protesting Peacefully; Calls on Attorney General to Investigate BPD Use of Force Against Demonstrators