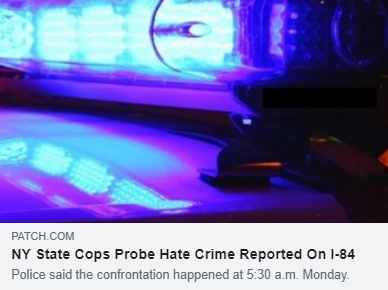 (NEW YORK, N.Y. 6/10/2020) – The New York chapter of the Council on American-Islamic Relations (CAIR-NY), a chapter of the nation’s largest Muslim civil rights and advocacy organization, today condemned a hate-crime victimizing a Hispanic woman on New York’s Interstate 84. The incident occurred at 5:30 a.m. in Brewster, near exit 65. The victim thankfully sustained no injuries.

While sleeping in her car on the westbound shoulder of I-84, the woman was approached by two white males in a Chevrolet pickup truck. The suspects began screaming racial slurs, prompting the victim to attempt an escape. Upon driving away, the men struck her car with their two-tone, black and silver Chevrolet truck.

The second suspect was described as a Caucasian male, possibly in his mid-20’s, skinny build, wearing a green tank top, and with a tattoo of the letters “Ang” located on his left wrist.

“CAIR-NY condemns the dangerous, aggressive and racially-motivated attack on this innocent woman resting in her car. While we are deeply thankful the victim sustained no injuries, the suspects must be identified and held accountable. To this end, CAIR-NY is calling on Brewster residents who may have any information about the identity of the two men to contact local law enforcement. We hope the aggressors are caught and brought to justice swiftly before any more harm is perpetrated.”


CAIR-NY is committed to representing and defending the integrity of the victims of heinous acts and hate-crimes.

To report a hate crime or bias-incident/discrimination to the Attorney General’s office, New Yorkers may call the AG’s hotline at 1-800-771-7755 or email civil.rights@ag.ny.gov.