CAIR-NY Condemns Use of Force by Buffalo Police Officers Against 75-Year-Old Man Protesting Peacefully; Calls on Attorney General to Investigate BPD Use of Force Against Demonstrators 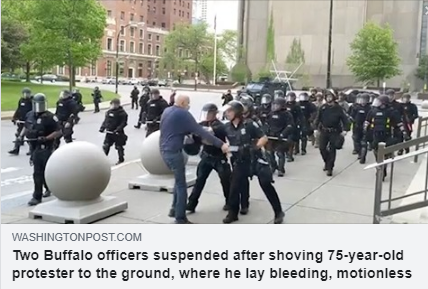 (NEW YORK, N.Y., 6/5/2020) – The New York chapter of the Council on American-Islamic Relations (CAIR-NY), a chapter of the nation’s largest Muslim civil rights and advocacy organization, today condemned the aggressive use of force by three Buffalo police officers against a 75-year-old man.

The assault occurred Thursday evening during an anti-Police brutality demonstration, and two of the officers have since been suspended, and an internal affairs investigation launched. CAIR-NY also called on New York Attorney General Letitia James to investigate the Buffalo Police Department’s use of force against demonstrators.

The victim, Martin Gugino, approached a caravan of officers beginning to enforce a curfew, and was subsequently shoved by one officer and jabbed with a baton by another. Gugino was pushed backward, fell and hit the back of his head against the pavement. Bleeding from the ear and head, Gugino’s condition was ignored by more than a dozen officers until two state-police rendered aid. Gugino, a longtime committed activist, has suffered head trauma and is in stable, yet serious condition.

Buffalo Mayor Byron Brown, and Governor Andrew Cuomo have both condemned these officers for abusing the law.

Earlier this week, Buffalo community leader Myles Carter was speaking with a local television reporter during a peaceful demonstration when police in riot gear rushed forward, grabbed him and slammed him to the ground. Mr. Carter’s hands were in the air and his back to the police when they charged forward. Video of this incident also spread widely.

“The assault on Martin Gugino is absolutely despicable and CAIR-NY wishes to condemn this unwarranted, aggressive behavior at the hands of these officers. The peaceful demonstrations unfolding across the country are a symptom of a distraught, dissatisfied people who demand systemic change. This example of police brutality is far from an isolated instance, and CAIR-NY welcomes the swift suspension of the two officers. Nonetheless, we expect all instances of police violence to be investigated more aggressively.”

“The video of Buffalo police officers violently shoving a 75-year-old protester is a deeply troubling example of why so many are legitimately protesting police use of force around New York and the country. It is unacceptable for police officers to respond to these peaceful protests with aggressive tactics and excessive use of force. The lack of assistance provided to Mr. Gugino speaks to the cruelty of the BPD officers involved.

“Attorney General James must initiate an investigation into the Buffalo Police Department’s use of force against peaceful demonstrators.”

Mohamed noted that Attorney General James has launched an investigation into the NYPD’s use of force tactics in New York City.

SEE: CAIR-NY Welcomes NY AG Investigation into NYPD Use of Force Against Protesters