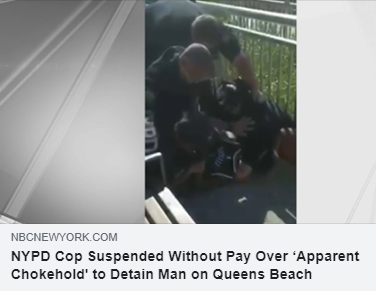 (NEW YORK, N.Y., 6/22/2020) – The New York chapter of the Council on American-Islamic Relations (CAIR-NY), a chapter of the nation’s largest Muslim civil rights and advocacy organization, today condemned the use of an illegal chokehold by an NYPD officer to restrain 35-year-old Ricky Bellevue on Sunday morning at Rockaway Beach in Queens. The NYPD has suspended the offending officer without pay.

The application of this chokehold by the officer comes just days after the New York City Council passed a series of bills intended to ban all chokeholds in the wake of protests against police brutality, anti-Black discrimination and the murder of George Floyd.

According to the legislation, any officer who deploys a chokehold will be charged with a misdemeanor offense. In alignment with this, Commissioner Dermot Shea has launched a full investigation into this incident.

The NYPD claims to have been responding to reports that three men were allegedly harassing people on Rockaway Boardwalk. According to Bellevue’s attorney, Lori Zeno, these accounts do not hold up.

In a statement responding to this offensive use of force, CAIR-NY Executive Director Afaf Nasher said:

“To yet again have to watch another video of a police officer using a chokehold is absolutely appalling. We commend the NYPD’s swift suspension of the officer as a first step in the right direction, but we need more action if unnecessary violent force often aimed at Black community members is going to be fully eradicated.”

CAIR-NY envisions safer communities for all and is committed to fighting police violence and brutality.

SEE: CAIR-NY Welcomes NY AG Investigation into NYPD Use of Force Against Protesters