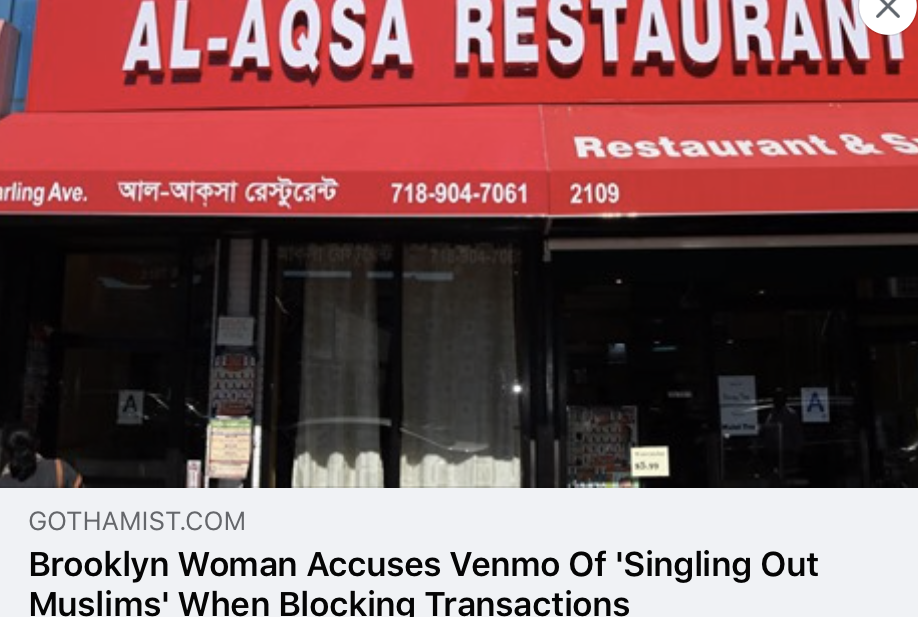 (NEW YORK, NY, 7/21/2020) – The New York chapter of the Council on American-Islamic Relations (CAIR-NY), the nation’s largest Muslim civil rights and advocacy organization, today announced the filing of a discrimination complaint with the New York City Human Rights Commission against payment processor Venmo for its policy of targeting payments associated with Islam or Arab nationality or ethnicity.

According to the discrimination complaint, on December 21, 2019, Ms. Shahana Hanif, a Muslim Bangladeshi woman, sent a payment through Venmo to pay her friend back for a meal they ate together at Al-Aqsa Restaurant in the Bronx. Venmo flagged and restricted the payment.

Several hours later, Ms. Hanif got an email from a Venmo representative asking about her “reference to ‘Al-Aqsa’.” The complaint alleges that the term “Al-Aqsa” was flagged for being parallel to the Al-Aqsa Mosque, one of the holiest sites in Islam, and therefore that Venmo’s filtering of payments with the term “Al-Aqsa” singles out Muslims.

Ms. Hanif is a community organizer and candidate for New York City Council in Brooklyn’s 39th District. The incident she experienced, which left her feeling offended and humiliated, is illustrative of a broader discriminatory policy used by Venmo of flagging certain payments with identifiers related to Islam or Arabic terms, a policy which singles out and criminalizes consumers on the basis on their real or perceived identities or Muslim faith.

When Ms. Hanif shared her experience on Twitter, multiple users quickly reported similar experiences. Examples of flagged or restricted payments include those for a ticket for a Syrian play and a gelato flavor called “Syrian lemonade.”

Newsweek tested several dozen payments on the service using various terms. Payments with terms like “Persian,” referencing an ethnicity associated with the Muslim-majority country of Iran, were flagged and singled out solely on that basis. In contrast, transactions mentioning “Cuba sanctions” and “North Korea food,” reportedly passed through unflagged.

SEE: Venmo Flags Payments for ‘Persian’ Restaurants, Other Terms Related to Iran Due to Sanctions

SEE: Discrimination Complaint Against Venmo for Policy that Singles Out Muslims

CAIR-NY Client Shahana Hanif said: “Muslims are surveilled in harmful and often covert ways making it difficult to feel safe while doing the basics, like eating at a restaurant with friends. When my Venmo transaction at Bronx restaurant Al-Aqsa was blocked for using the name of the restaurant, I knew it was a racist, Islamophobic tactic by Venmo to monitor so-called “suspicious” payments. What qualifies for a suspicious transaction? Many digital apps employ this discriminatory practice to single-out Muslims. My $14 lunch was flagged for suspicious activity. This is unacceptable. I demand better for Muslims.”

CAIR-NY Of Counsel Carey Shenkman said: “What happened to Ms. Hanif – being forced to justify eating with friends because of associations with religion or race – is totally unacceptable. Yet this is sadly a reality for many Muslims. We hope that Venmo will amend its practices in a manner that treats users of their service equally and fairly, and that respects fundamental human rights and New York law.”

CAIR-NY Legal Director Ahmed Mohamed said: “Venmo has been on notice for their discriminatory flagging of payments and singling out Muslims for two years. Yet, Venmo has failed to fix its filters and continues to criminalize transactions on the basis of religion and ethnicity. Shame on Venmo! ‘Banking While Muslim’ and ‘Venmoing While Muslim’ should not be a thing but unfortunately they are. CAIR-NY will continue to expose Venmo and other financial institutions for their discriminatory policies. If you do not want to be labeled a ‘discriminator,’ we suggest you change your policies and truly provide equal service to all.”

Victims of #BankingWhileMuslim or #VenmoingWhileMuslim are encouraged to contact CAIR-NY for assistance by filing an incident report online at www.cair-ny.org/incident-report or call 646-665-7599.