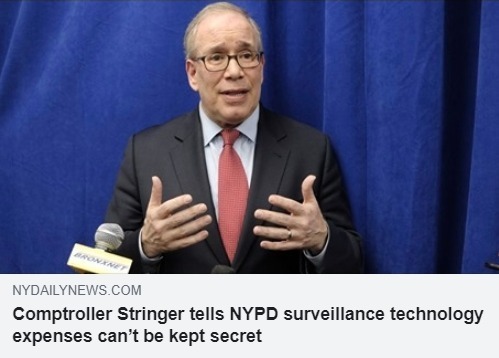 In a letter sent to police Commissioner Dermot Shea, Comptroller Stringer insisted that the memorandum of understanding that allows this spending information to remain secret will expire on August 27th. Comptroller Stringer has implied that this decision comes as a logical result of the Mayor’s signing of the Public Oversight of Surveillance Technology (POST) Act, legislation that CAIR-NY fiercely advocated for.

The NYPD has aggressively pushed back against the POST Act, but nonetheless, Comptroller Stringer seeks to enforce “new processes that maximize transparency and accountability” within the NYPD’s budget.

“The POST Act is a first, but monumental step toward demanding full transparency and accountability from the NYPD. As the largest police department in the United States, the NYPD needs comprehensive oversight. The ability to make multi-million-dollar purchases with no oversight is irresponsible and should never have been granted.  We welcome Comptroller Stringer’s decision to end the MOU that shrouded the massive surveillance budget in secrecy and look forward to further enforcement of the POST Act for greater transparency and protection for all New Yorkers.”

CAIR-NY is a strong advocate for demanding department accountability from the NYPD: