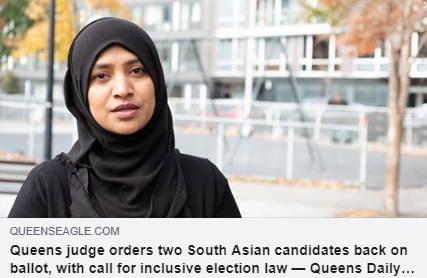 (NEW YORK, NY, 5/5/2020) — The New York chapter of the Council on American-Islamic Relations (CAIR-NY), the nation’s largest Muslim civil rights and advocacy organization, today welcomed a Queens Supreme Court judge’s ruling reinstating two Muslim candidates of Bangladeshi descent to the June primary ballot after initially being removed by the Board of Elections.

The Board of Elections initially dropped the two candidates over differences between their legal and professional names. In an order reinstating Assembly candidate Mary Jobaida and Democratic District Leader candidate Moumita Ahmed, Queens Judge Leonard Livote stated that the diversity of Queens demands a more “expansive view” of name customs.

“It is imperative that the diversity of our population be reflected in our democracy. Despite having the largest South Asian population in New York, Queens currently has no elected officials of South Asian descent. We welcome the Judge’s order reinstating these two Muslim candidates on the June ballot, giving the people the power to vote for whomever they believe will represent them best.”