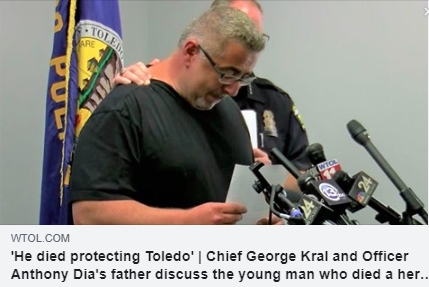 (CLEVELAND, OH, 7/8/2020) – The Ohio chapter of the Council on American-Islamic Relations (CAIR-Ohio) today offered its condolences to the family and friends of Toledo Police Officer Anthony Dia, who was shot and killed on Saturday, July 4, in the line of duty.

Officer Younes “Tony” Dia, who was known and loved for his professionalism and caring service to the community, died after being shot by an armed man in the parking lot of a west Toledo area Home Depot. Officer Dia was on a solo patrol responding to a call about a man causing a disturbance. He engaged the suspect who pulled a handgun and fired on him.

“It is with deep sadness that we offer our sincere condolences to the family, friends, and fellow officers of Officer Anthony Dia, who represented the best of what it means to serve and protect.

“The Toledo Muslim community is proud of his heroic service as a uniformed officer. It is clear from the outpouring of support and recountings of his kindness, compassion, and dedication that Officer Dia left an indelible mark on the Toledo community.

“We pray for his family to be comforted by the memories of their fallen hero, who was slain in the line of duty on the 4th of July. We thank them for the service of Officer Dia, who gave the ultimate sacrifice by putting service above self. We hope young people from the community will step forward in his honor to carry on the legacy of protection and service demonstrated by Officer Dia.”