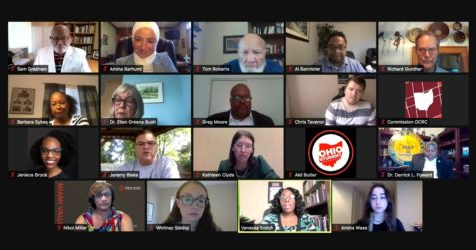 (CINCINNATI, OHIO 07/29/2021) – On Thursday, July 22, the Ohio chapter of the Council on American-Islamic Relations (CAIR-Ohio) testified before the Ohio Citizens’ Redistricting Commission (OCRC) to advocate for equal districts that fairly represent the Muslim community.

Redistricting – the drawing of new state and congressional district maps – directly impacts the voting power of the Muslim community. Ohio is one of the most gerrymandered states in the nation, ensuring that district maps favor politicians instead of voters. That often means purposefully splitting up communities into different districts to dilute their political power. Furthermore, the public has been left in the dark about this process for far too long.

It is critical Ohio Muslims are not left out, split up, or ignored. That’s why CAIR-Ohio has been advocating for fair maps and educating and mobilizing the Muslim community.

In the OCRC public hearing, which focused on Southwest Ohio, Amina Wase, a CAIR-Ohio intern who lives in Centerville and is educating her community about redistricting, testified on her perspective as a Muslim American.

“As a Muslim American who is civically engaged in my community, I witness the direct impact gerrymandered districts have on minorities. A substantial Muslim community in my area is split between districts. Right now from my house I can walk about five minutes east and I’ll suddenly be in another district but my Muslim neighbors five minutes east of me are still part of my community. We should be in the same district to be fairly represented. Being split between districts heavily impacts how our Muslim community can advance issues. In a time when Americans overwhelmingly have negative views of Muslims, it’s essential we have the ability to elect representatives to uphold our rights.”

“No matter what party you’re affiliated with, you deserve adequate political representation,” she said.

CAIR-Ohio is a proud member of the Ohio Citizens’ Redistricting Commission, Equal Districts Coalition, and the Equal Districts – Grassroots Mobilization Subcommittee. The organization has been engaged in the fight for fair maps this summer through community events, training citizens on mapping submitting community maps, distributing educational materials, testifying at hearings, and speaking at town halls.

Community members can fight for fair maps and against gerrymandering by: