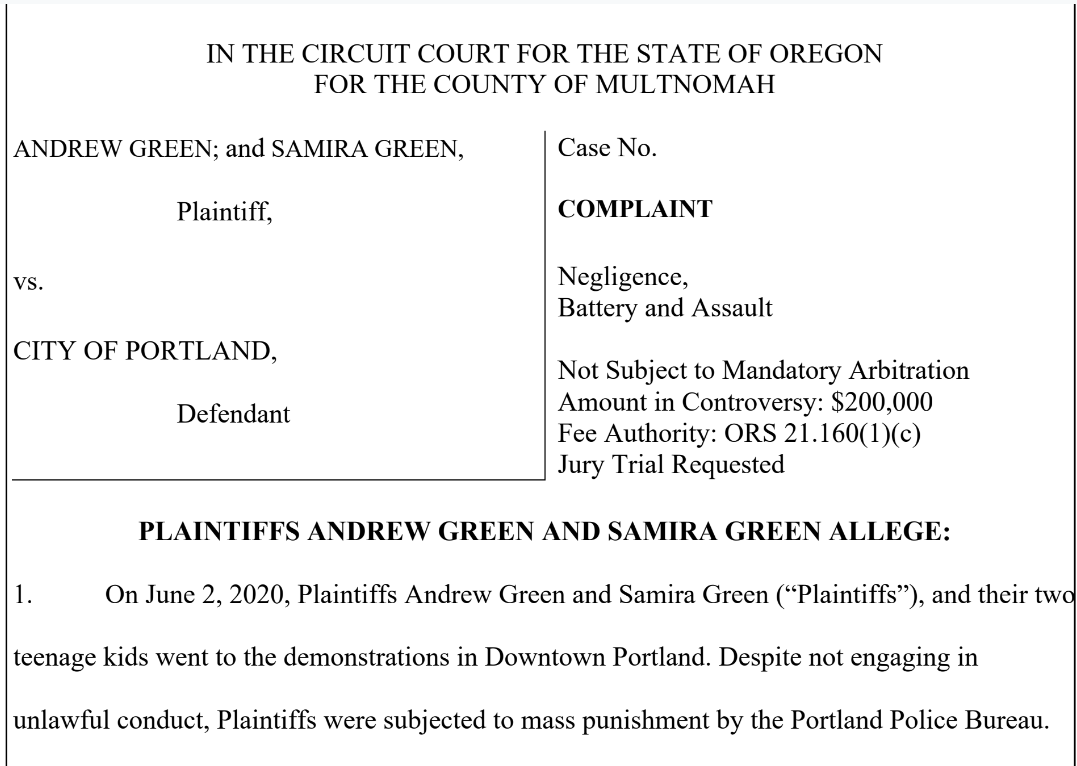 (PORTLAND, OREGON, 6/8/20) The Oregon chapter of the Council on American-Islamic Relations (CAIR-Oregon) condemns the actions undertaken by the Portland Police Bureau (PPB) on June 2, 2020.

Officers ambushed and then fired “non-lethal” munitions onto peaceful protesters. This group of protesters included families with children, members of the Muslim community, and members of the CAIR-Oregon board.

In defense of those Muslim family members, the Oregon Justice Resource Center (OJRC) has filed a civil rights case against the City of Portland.

The following statement has been issued by the Board of CAIR-Oregon:

Members of the Muslim community and the CAIR-Oregon board were protesting on Tuesday, June 2, 2020, for racial justice and police accountability, when the Portland Police Bureau began firing upon all protesters, indiscriminately. Members of the Muslim community present included women and children. One of those women—a pregnant black Muslim woman (with permission, we are sharing her story)—was tear-gassed so severely she started vomiting.

We support today’s filings against the City of Portland by our partners at OJRC, and  will be exploring all potential legal and advocacy options to counteract PPB’s actions.

In the strongest terms possible, we condemn the actions by the PPB, as well as the failure of civilian leadership under Mayor Wheeler. Downtown Portland was turned into a warzone. That all of this took place amid a global pandemic, one which infects the lungs and respiratory system, shows the antipathy of the PPB towards the people they are sworn to serve and protect.

We, along with many community organizations, faith and community leaders, and journalists, warned Mayor Wheeler back in August of 2018, that the PPB’s crowd control tactics were putting people’s lives at serious risk; since then, he has failed to change anything.

As a result, we respectfully request the following:

First, we call upon the Portland City Council to demilitarize and defund the PPB. Commissioner Hardesty’s proposed changes in last Wednesday’s Oregonian are a necessary start to the police reform conversation in Portland—though the conversation cannot end there. We urge other members of the City Council to support these measures immediately.

These PPB programs have entrenched an unruly institution into community life and advanced the notion that police violence is an adequate solution to social problems. This ideology has traded off with funding for public health, mental health and community solutions—ultimately, the safety and well being of Portlanders.

Further, all munitions, other military-grade equipment, and military tactics should be immediately suspended from use, pending review. The officers and command staff responsible for firing upon protesters must face immediate disciplinary measures and censure, if not dismissal.

We are also calling for the ending of qualified immunity. Too often, police departments have escaped scrutiny through nefarious actions, and because theirs is in an institution our political system trusts by default. PPB has shown themselves unworthy of that trust, and an independent entity should have the power to investigate and prosecute them.

Second, we call upon the public to keep protesting. We are deeply inspired by the Black, Indigenous, People of Color (BIPOC) youth leading this movement, and will do everything in our power to support them. The PPB would like to see nothing more than for the streets to be empty and to triumph in their campaign of brutality. Portlanders: defy this mandate and fill the streets. These are our streets. Fill them for black lives. Fill them for the families who have lost their family members to police brutality. Fill them for George Floyd, Breonna Taylor, Kendra James, and Quanice Hayes. Fill them for Amadou Diallo and Mohammad Usman Chaudhry.

Finally, we call upon the state legislature to take immediate action to protect black lives. We are demanding a special legislative session specifically devoted to police accountability and racial justice.

It will take a long time for marginalized communities of color to heal from the repeated wounds of white supremacy and police brutality–let alone, what has occurred this past week in Portland. The impact of this level of marginalization has left communities of color without spaces or resources to heal, and Oregon has purposefully not invested in the systems necessary for our communities to thrive. We won’t stop fighting until they can do that.