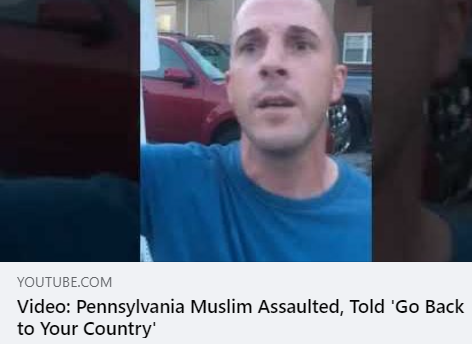 (PHILADELPHIA, PA, 9/17/20) – CAIR-Philadelphia and CAIR-Pittsburgh today welcomed charges brought against a man caught on video making racist remarks and assaulting a Muslim man out walking in their neighborhood.

On Saturday, September 5, 2020, Farrukh Abbas Hashmi, a Muslim resident of King of Prussia, Pa., was walking in his neighborhood when an unleashed dog approached him. When Hashmi confronted the dog’s owner, the man reportedly berated him, threatened him with physical violence, hurled racial slurs and epithets at him, and ultimately assaulted him. Hashmi recorded most of the incident with his cell phone, contacted local enforcement, and finally contacted CAIR’s national office in Washington, D.C.

Video: Pennsylvania Muslim Assaulted, Told ‘Go Back to Your Country’

CAIR-Philadelphia and CAIR-Pittsburgh, in partnership with CAIR National, contacted the Upper Merion Township Police Department on behalf of Hashmi and advocated for the identification, arrest and charging of his alleged assailant.

The Upper Merion Township Police Department has informed CAIR that it has identified Hashmi’s assailant and will be charging him with four counts: §2710(a) ethnic intimidation; §2709(a)(1) harassment; §5503(a)(1) disorderly conduct; and the Upper Merion Township ordinance 73-3 on the required confinement and/or control of dogs.

“No one should have to endure the vicious attack Mr. Hashmi experienced from both animal and man. We are pleased that the Upper Merion Township Police Department took this matter seriously and elected to bring charges against the individual allegedly responsible for this heinous attack. CAIR will continue to stand against bigotry and hatred against all the people of our nation and will continue our fight to ensure the protection of our constituents.

“We believe it is due to CAIR’s involvement in this matter, as well as to Mr. Hashmi’s bravery in recording his attacker, that has resulted in the swift charging of the individual allegedly responsible for the racist attack.”

He added that CAIR-Philadelphia will represent Hashmi as the case moves through the courts.