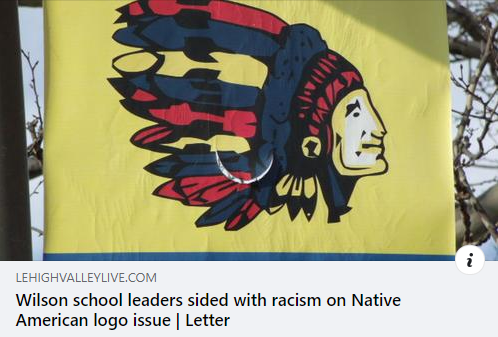 Last month, the Wilson Area School District superintendent announced the district would begin phasing out the logo. At a school board meeting on August 16, a crowd of people demanded the logo be retained. Last Friday, the superintendent announced that he would develop a logo policy that would include the depiction of the stereotypical Native American on a list of approved logos. A draft of the policy will be announced at the next board meeting in September.

Wilson Area Schools Will Keep the Native American Logo After All

“Wilson Area Schools had an opportunity to take a principled stand against racism and the continued mischaracterization of Indigenous culture, but they apparently surrendered to pressure by those wishing to continue our nation’s legacy of harm done to Native Americans and their culture,” said CAIR-Philadelphia Outreach and Education Director Ahmet Tekelioglu. “We call on Wilson Area Schools and all educational institutions to do their part to challenge our nation’s legacy of racism, xenophobia and white supremacy.”

He noted that CAIR has previously called on schools to drop offensive logos and symbols distorting Native American culture.

Tekelioglu said the American Muslim community and CAIR stand in solidarity with all those challenging anti-Black racism, xenophobia, Islamophobia, anti-Semitism, white supremacy, and all other forms of bigotry.