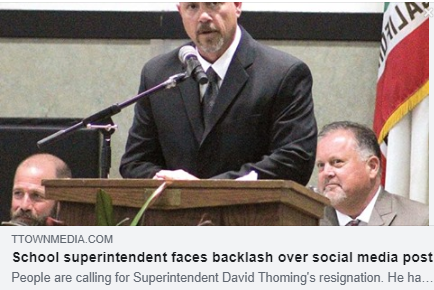 New Jerusalem Superintendent David Thoming and his wife are facing a backlash over recent Facebook posts.

Thoming’s wife shared a meme on her Facebook page – with the text “Just sayin'” – that stated: “So rioters you say country boys are next. You do realize country boys will sit 30 feet up on a tree all day just to kill something.”

In the comments, Superintendent Thoming responded, “It’s what we’ve been prepping for…” along with a graphic of a man with a blazing machine gun.

A change.org petition, “Demand David Thoming’s Resignation from NJESD Now!” by DCHS Students Against Racism, has been signed by more than 1,500 people.

“We condemn this atrocious post. Any comment threatening violence toward community members is shocking, vile and unacceptable; when it comes from a top school official, it is deeply disturbing. He should resign from his position.”