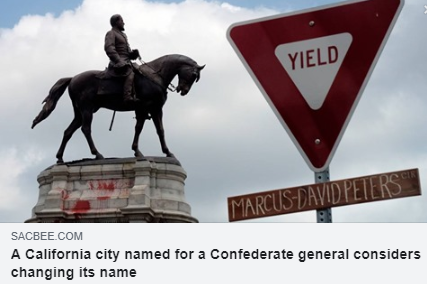 (SACRAMENTO, 6/15/20) – The Sacramento Valley office of the Council on American-Islamic Relations (CAIR-SV) today joined calls for a Northern California coastal city to change its Confederate-general name.

The city of Fort Bragg is named after Gen. Braxton Bragg, who left the U.S. Army to join the Confederacy in the Civil War.

On Friday, the city posted on its Facebook page that after receiving “many requests (some local and many not) that the City of Fort Bragg, California change its name,” the City Council will discuss on June 22 placing the question on the ballot in November for voters to decide.

Calls to rename Fort Bragg have increased after George Floyd’s killing by Minneapolis police, which ignited nationwide protests and efforts to get rid of statues or names that connect to the Confederacy.

“We can’t continue honoring and uplifting the names of those who tore this country apart to defend the scourge of slavery. We encourage the Fort Bragg City Council to put the issue of dropping its Confederate name up to a vote.”