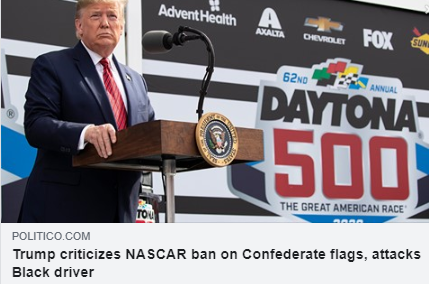 (WASHINGTON, D.C., (7/6/20) – The Council on American-Islamic Relations (CAIR), the nation’s largest Muslim civil rights and advocacy organization, today said President Trump’s defense of the Confederate flag and his most recent use of white supremacist and divisive rhetoric places him “squarely on the side of racists and traitors.”

Trump lashes out at NASCAR, Bubba Wallace over flag, rope

Over the Independence Day holiday, Trump compared anti-racism protesters to Nazis and terrorists.

“With his defense of the Confederate flag, Mr. Trump places himself squarely on the side of racists and traitors who sought to destroy the United States and preserve slavery. His repeated promotion of racism and defense of white supremacy is a cynical and corrosive appeal to a shrinking base of supporters who he obviously believes is receptive to a message of hatred and bigotry.”

Awad noted that CAIR has repeatedly expressed concern about the Trump administration’s Islamophobic, white supremacist and racist policies and appointments and he believes Trump’s racist and divisive rhetoric leads to increased hate crimes and discrimination.