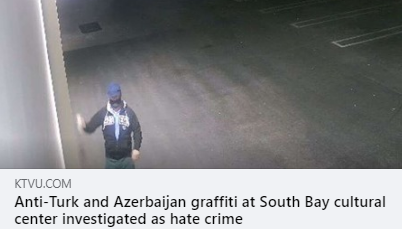 J News reported that on October 18, early morning, a Nazi swastika was drawn on the door of the synagogue. This sanctuary dates to 1914 and Rabbi Jacqueline Mates-Muchin states that the doors are believed to be original. This is one of many vandalisms that occurred at this synagogue.

On Tuesday, the Azerbaijan Cultural Society headquarters in the South Bay Cultural Center in Los Gatos was vandalized with anti-Turkish language. A board member of the center has stated that the war happening overseas has led to heightened tensions in the Bay Area.

Both incidences are being reported as hate crimes and being investigated by their respective police departments.

Zahra Billoo, Executive Director of CAIR-SFBA said in a statement:

“We condemn the heinous attacks on Temple Sinai and the Azerbaijan Cultural Society and express our solidarity with the Jewish and Azerbaijani communities during this time of growing anti-Semitism and other forms of bigotry nationwide. Houses of worships and cultural centers should be sanctuaries for their communities, and it is extremely saddening to see vandalism take place. We call on local leaders of both places to monitor the situation.”