CAIR-SFBA Expresses Solidarity with the Armenian Community After Multiple Attacks 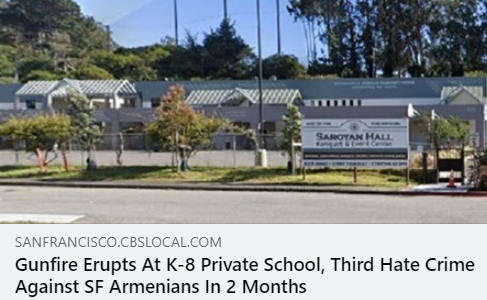 (SANTA CLARA, CA, 9/22/2020) – The San Francisco Bay Area office of the Council on American-Islamic Relations (CAIR-SFBA) today expressed solidarity with the Armenian community after a suspected arson fire at the St. Gregory the Illuminator Armenian Apostolic Church and gunshots were fired at the Krouzian-Zekarian-Vasbouragan (KZV) Armenian school.

In a statement, CAIR-SFBA Executive Director Zahra Billoo said:
“We are outraged at the multiple attacks targeting the Armenian community. We express our deepest concern and solidarity and call on local leaders to monitor the situation.”

Last Thursday, an Armenian church in San Francisco was found burning in a suspected arson leaving severe damage to the building. A few days later, officers heard gunshots near KZV School. After investigating the area, a sign outside of the school and the building itself was found damaged by bullet holes.

In the last two months, three suspected hate crimes have been committed against Armenian institutions. Members of Armenian American community in San Francisco speculate that is connected to the military tension between Armenia and Azerbaijan.

These incidents are followed a previous incident at the school on July 24, where video surveillance showed suspects vandalizing walls with graffiti.