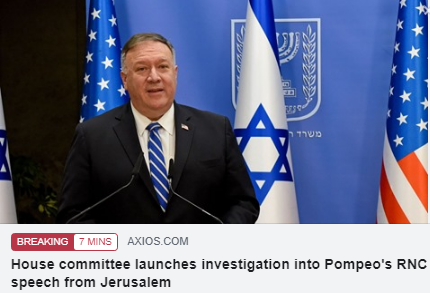 (WASHINGTON, D.C., 8/25/20) – The Council on American-Islamic Relations (CAIR), the nation’s largest Muslim civil liberties and advocacy organization, today filed a written complaint with the Department of State Office of Inspector General requesting Acting Inspector General  Diana R. Shaw  investigate whether or not Secretary of State Mike Pompeo issuing a pre-recorded political speech — which will be aired today at the Republican National Convention (RNC), recorded while on a State Department funded mission to Jerusalem — is a violation of the Hatch Act of 1939.

CAIR’s letter of complaint was submitted through the office’s online “Hotline Submission Form.”

“As you are aware, the Hatch Act prohibits all federal employees in the Executive Branch, including the Secretary of State, from engaging in some forms of political activity. With Secretary Pompeo’s official Department of State visit as a backdrop to his pre-recorded political speech, CAIR is concerned that he is using this taxpayer funded mission on behalf of the United States for partisan political gain.

“While spokespersons for the Department of State and Secretary Pompeo’s legal counsel have stated that no department funds or staff were used in Pompeo’s pre-recorded address to the RNC – the cost of the trip and visit itself is being paid for by the Department of State – while Pompeo strategically utilizes his presence in Jerusalem as a prop for partisan political gain.

“It is being reported that Secretary Pompeo’s pre-recorded speech to the RNC itself, regardless of location, contradicts internal Department of State legal memos that provide guidance advising against such political activities.

“Yesterday, it was reported in Politico that:

“‘On [February] 18, 2020, Deputy Secretary of State Stephen Biegun sent State Department employees an email … that urged them to look at a handful of legal memos that laid out an updated set of limitations on the political activity of U.S. diplomats and other State staffers.

“‘The legal memos, obtained by POLITICO, include an instruction that says: ‘Senate-confirmed Presidential appointees may not even attend a political party convention or convention-related event.’ That sentence is one of the few to be bolded in one of the memos.’

“For these reasons, CAIR requests that the Office of the Inspector General of the Department of State investigate whether Secretary Pompeo’s pre-recorded speech to the RNC while on mission is a violation of the Hatch Act, and in contradiction of Department of State legal guidance.”