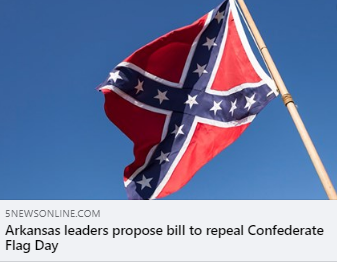 “As we saw January 6th in our nation’s capital, Confederate flags remain a poisonous symbol of treason, racism and white supremacy,” said CAIR National Communications Director Ibrahim Hooper. “States must purge all elements of society that honor traitors who sought – and continue to seek – the destruction of America.”

Hooper noted that theArkansas state flag still has a star that was added to represent the Confederacy.

He said CAIR has repeatedly urged the removal of Confederate holidays, symbols and racist laws.

Earlier this month, CAIR supported the removal of a Confederate monument in front of the Botetourt County courthouse in Fincastle, Va.