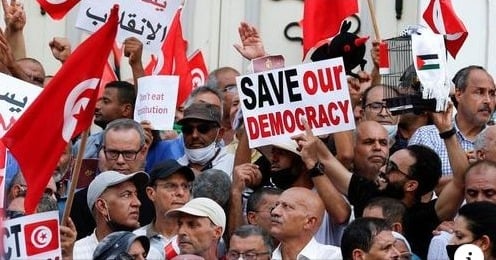 (WASHINGTON, D.C., 1/13/2022) – On Friday, January 14, the Council on American-Islamic Relations (CAIR) plans to join the Tunisian United Network (TUN) and leaders from other human rights and pro-democracy organizations in a press conference on the 11th anniversary of Tunisia’s democratic revolution to call on the Biden Administration to do more to save democracy in that country.

“Supporting or enabling unjust dictatorships in the Middle East has been a disastrous pillar of American foreign policy for decades,” said CAIR Government Affairs Director Robert S. McCaw. “The Biden Administration should stand up for our nation’s stated values by clearly and forcefully demanding a return to representative government in Tunisia.”

WHAT: Press Conference, Save Tunisia’s Democracy

*NOTE* Those who wish to attend in person must RSVP at Mongi25d@gmail.com.

On January 14, 2011, Tunisia’s dictator, Ben Ali, fled the country after massive anti-corruption, pro-democracy protests. In 2019, Kais Saied was elected president by an overwhelming majority as an outsider law professor who vowed to rid the country of corruption. On July 25, 2021, he decided to suspend the parliament, fired the government, and consolidated power in the presidency. Since then, Tunisian protesters, civic groups and members of parliament have called for a restoration of democratic rule.