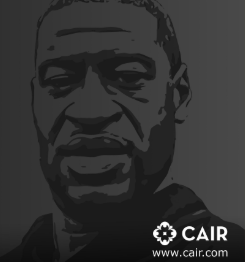 (WASHINGTON, D.C., 6/24/20) – On Thursday, June 25, the Council on American-Islamic Relations (CAIR), the nation’s largest American Muslim civil rights and advocacy organization will mark the one-month anniversary of George Floyd’s murder by unveiling a Black Lives Matter banner in his honor on the outside of CAIR’s Capitol Hill headquarters in Washington, D.C.

UNVEILING WILL BE LIVESTREAMED AT:

CAIR’s banner contains the names of hundreds of victims of racist police violence, including George Floyd and Rayshard Brooks, as well as the names of African-Americans who died in the struggle for civil rights, such as Emmett Till, Medgar Evers, and Dr. Martin Luther King, Jr.

It will also call on members of Congress to support, co-sponsor and adopt the Justice in Policing Act to address continuing police killings of unarmed Black Americans like George Floyd and Breonna Taylor. The bill is in response to nationwide #BlackLivesMatter protests seeking an end to systemic police racism, violence, misconduct, and abuse of authority.

WHERE: Outside CAIR’s Capitol Hill Headquarters, 453 New Jersey Avenue, S.E., Washington, DC, 20003 (NOTE: Social Distancing and other COVID-19 prevention measures will be observed at the unveiling. Attendees are required to wear face masks.)

“We are dedicating this space on our Capitol Hill headquarters to express the American Muslim community’s solidarity with the Black Lives Matter movement and to demand that Congress pass the Justice in Policing Act,” said CAIR National Executive Director Nihad Awad. “We alsocall on Congress to reject the Senate’s watered-down policing bill, which does not fully address the root causes of discriminatory and abusive policing.”

CAIR recently condemned a white supremacy banner in Iowa and the vandalism of a George Floyd mural in Utah.