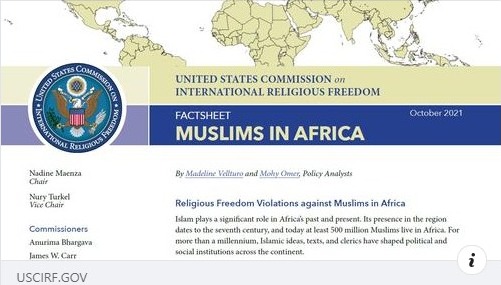 (WASHINGTON, D.C., 10/20/21) – The Council on American-Islamic Relations (CAIR), the nation’s largest Muslim civil rights and advocacy organization, today responded to recent reports of Muslim minority communities being discriminated against and attacked by state and non-state actors in certain African countries and Sri Lanka by calling on the Biden administration and Congress to investigate and respond to separate claims made by the United States Commission on International Religious Freedom (Africa) and Amnesty International (Sri Lanka).

“State discrimination and violence against Muslim and minority faith communities should not just be condemned by our government but responded to in the form of punitive designations and sanctions – whether it is occurring in countries where Muslims are the majority or minority,” said CAIR Director of Government Affairs Department Robert S. McCaw.

This week, Amnesty International issued the report “Sri Lanka: From burning houses to burning bodies: Anti-Muslim violence, discrimination and harassment in Sri Lanka.” The report documents incidents where Muslims have been targeted, attacked and discriminated against, by various state and non-state actors.

Also today, USCIRF published its recommendations that the State Department should designate certain African countries as countries of particular concern (CPCs) or special watchlist (SWL) countries for “state persecution of Muslim minorities in Nigeria, Egypt, Algeria; attacks on Muslim leaders and houses of worship; and targeting of Muslims in the context of political conflict.”

USCIRF recent report includes documentation of state prosecution against Shia Muslims in Egypt, Nigeria, and the island nation of Comoros.