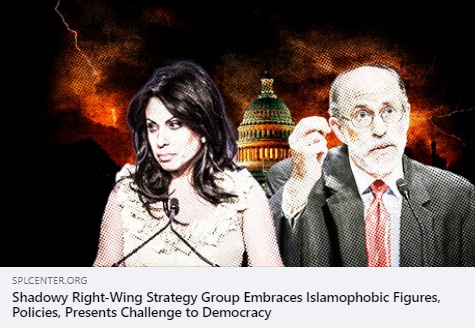 As reported by the Southern Poverty Law Center, the CNP is “a coalition of influential right-wing leaders, political operatives, conservative media figures, members of the religious right, free-market fundamentalists and donors. The coalition operates on multiple fronts and focuses on political strategy, media and grassroots organizing. The goal of the coalition is to advocate for right-wing and anti-rights policies that favor conservatives and the religious right.”

In 2016, Hatewatch published a 191-page membership directory that included more than 400 members. The directory shows CNP membership included anti-Muslim extremists Brigette Gabriel and Frank Gaffney among many other right-wing figures. It also showed “Radical Islam” and “Islamic Fascism” to be among the interests identified by several CNP members.

“The Council for National Policy can demonstrate its repudiation of Islamophobia by severing ties with anti-Muslim extremists like Brigette Gabriel and Frank Gaffney,” said CAIR Research and Advocacy coordinator Huzaifa Shahbaz. “Refusal to sever these ties would be a clear indication that CNP has no problem with those who promote anti-Muslim conspiracy theories.”

Brigette Gabriel, the founder of ACT for America, claimed that a Muslim “cannot be loyal to the United States” and that “Islam is the real enemy.” The group is also known for spewing anti-Muslim conspiracy theories, including Muslims are “infiltrating” American institutions to impose Sharia law.

In June 2018, CAIR called on Fox News to pull representatives from an anti-Muslim hate conference hosted by ACT for America.

Frank Gaffney is a notorious anti-Muslim conspiracy theorist who has falsely claimed that most mainstream American Muslim organizations are hostile to our nation and its Constitution.

He is a key promoter of the bizarre conspiracy theory that Muslims in public service are infiltrating the government on behalf of the Muslim Brotherhood. Anders Breivik, the Norwegian mass murderer, even cited Gaffney in his anti-Muslim manifesto.

Gaffney staff attorney, David Yerushalmi, has advocated outlawing the practice of Islam in America and is the key promoter of anti-Islam bills in state legislatures nationwide.

Gaffney has in the past:

The Southern Poverty Law Center (SPLC) has identified Gaffney as an anti-Muslim extremist and his Center for Security Policy (CSP) as a hate group. According to the SPLC, CSP is a conspiracy-oriented mouthpiece for the growing anti-Muslim movement in the United States.