CAIR, Uyghur Groups to Give Hilton One Week to Cancel Hotel on China Mosque Site or Face Global Boycott 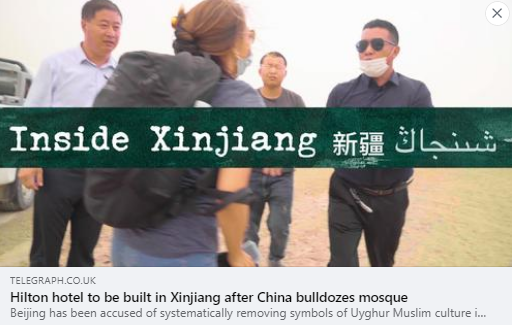 Delivery of demand letter to Hilton HQ in Virginia comes after months of requests by CAIR, other rights groups, Congress to drop plan to build hotel on site of bulldozed Uyghur mosque

(WASHINGTON, D.C., 9/7/21) – On Wednesday, September 8, the Council on American-Islamic Relations (CAIR), the nation’s largest Muslim civil rights and advocacy organization, and representatives of Uyghur Muslim groups plan to deliver a demand letter to Hilton Worldwide Headquarters (NYSE: HLT) in McLean, Va., giving a one-week deadline for Hilton to end an agreement to license the construction of a Hampton Hotel on the site of a bulldozed mosque in the Uyghur region of China.

Delivery of that letter comes after several months of communication with Hilton, which so far refused to cancel the project in China. Those delivering the letter will be available for media interviews afterward.

An international coalition of Uyghur groups, Muslim advocacy organizations and human rights groups in the United States and other nations has been formed to campaign for a boycott of Hilton if the corporation does not withdraw from the project by next week.

WHAT: Delivery of Demand Letter to Hilton Worldwide HQ in McLean, VA

“We plan to visit Hilton Headquarters tomorrow to give the corporation one final opportunity to do the right thing. Helping the Chinese government as it commits well-documented acts of genocide is morally wrong, legally dangerous and bad for business,” said CAIR National Executive Director Nihad Awad. “If Hilton supports China’s genocide of Uyghur Muslims by establishing a Hampton Inn on the site of a bulldozed Uyghur mosque, we will ask everyone who cares about human rights to stop supporting Hilton in this country and worldwide.”

The Telegraph revealed plans for the project on the site of the bulldozed mosque in June.

CAIR privately and publicly called on Hilton Worldwide to drop a licensing agreement to build a Hampton Hotel on the site of the mosque, but company officials have not met that demand.